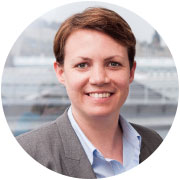 You can talk about Edinburgh as a city being an attraction for hosting an event, but the EICC is enough of one in itself – certainly as far as we’re concerned” Paul Bush OBE

Paul Bush is what you might call an international sports fanatic, and a self-confessed one at that. He’s worked at every Commonwealth Games and Olympic Games since 1986, from volunteer right through to team manager. He’s been Technical Director for British Swimming, Chief Executive of Scottish Swimming and Head of Sport for EventScotland. Now, as Chair of Commonwealth Games Scotland and Director of Events at VisitScotland, he reckons his dual-role is ‘one of the best in Scotland’ – and it’s on nights like the Team Scotland Scottish Sports Awards that he’s convinced of the fact.

“It’s not only the performance aspect of Scottish sport but also the volunteers, the communities, the governing bodies and the coaches that need recognition”

“Commonwealth Games Scotland has an annual dinner which has been running for many years now,” says Paul. “It’s always been an event with a lot of gravitas, but when I came into the post as Chair I felt it was the right time to launch something that celebrated all that’s great about Scottish sport in the widest possible sense.

“We launched it last year, and in just two ceremonies it’s become the biggest sporting event of its kind in Scotland. It’s not only the performance aspect of Scottish sport but also the volunteers, the communities, the governing bodies and the coaches that need recognition.”

The EICC has been privileged to host both ceremonies so far, with the second being held on 21 September this year. Over 600 of what Paul affectionately calls ‘the great and the good’ of Scottish sport were in attendance to see awards for 14 award categories being handed out before witnessing the presentation of the Emirates Lonsdale Trophy, awarded to the 2017 Scottish Sportsperson of the Year.

“It delights me that we’ve got such an incredible partner and venue in the EICC,” says Paul. “Both years have been sell-outs. When Marshall and I put our heads together for the first one, I knew that he shared our vision and that this was a genuinely world-class venue. You can talk about Edinburgh as a city being an attraction for hosting an event, but the EICC is enough of one in itself – certainly as far as we’re concerned.”

The ceremony made use of the EICC’s raked format, adding what Paul refers to as a ‘restaurant-like feel’ to the proceedings and ensuring everyone had prime views of the stage. “On top of that, the quality of the audio-visual equipment is second to none, the transport links are ideal and there are some great hotels in walking distance,” says Paul.

A legacy for Scotland’s sporting youth

In 2013 Scotland put in a bid for Glasgow to host the Youth Olympic Games and made it to the final three (alongside Medellin, Colombia and Buenos Aires, Argentina). The bid was lost, but it was decided that 2018 should remain a year dedicated to young people – and so was born Year of Young People 2018 (see our Cover Feature).

“One of the purposes of the Team Scotland Scottish Sports Awards is therefore to raise funds for our youth trust,” says Paul. “The funds are then given as grants to young athletes to help them further their sporting careers. It’s always been exciting for young athletes here in Scotland, but never more so than now.”

The EICC is looking forward to continuing its partnership with the Team Scotland Scottish Sports Awards in years to come, sharing in the recognition of Scotland’s incredible sporting scene. “It’s already an event that people make a point of putting in their diaries,” says Paul. “It’s a bit like Social Bite’s Scottish Business Awards – people say that if they’re going to anything in the year, this is it.”