Shortly after the end of the Second World War something beautiful happened in Edinburgh, something that would redefine the city before the eyes of the world: the inaugural Edinburgh International Festival was opened. Some of the finest creators and performers of theatre, music, opera and dance from across a war-torn Europe assembled in Scotland’s capital to reimagine a better future. It was, the then-Lord Provost of Edinburgh exclaimed, an occasion to ‘provide a flowering of the human spirit’.

“The International Festival was created as a way of bringing people together again through culture and expressing a newfound sense of optimism and internationalism,” says Julia Amour, Director at Festivals Edinburgh. “It’s a wonderful founding story. Edinburgh really was welcoming the world.”

“The International Festival was created as a way of bringing people together again through culture and expressing a newfound sense of optimism and internationalism” Julia Amour,
Director at Festivals Edinburgh

At the same time eight theatre groups turned up at the International Festival. They weren’t on the official programme but that didn’t stop them. Uninvited yet undeterred, they put on their own performances on the fringe of the International Festival. In doing so they inadvertently sowed the seeds for what is now the world’s largest arts festival: the Edinburgh Festival Fringe. Still today the Fringe retains its original ethos of welcoming anyone with a story to tell and a venue willing to host them. It’s since gone on to inspire more than 200 such ‘fringes’ across the world.

Inaugurated in the same year was the Edinburgh International Film Festival. Opened by John Grierson, the founder of the British documentary movement, it has become the longest continually-running festival of its kind in the world – a platform for Scottish and international voices through the medium of film.

Seven decades on and Edinburgh is now home to eleven major festivals. “Many people know about our peak season in August but we have festivals running right the way through from Hogmanay to Halloween,” says Julia. “That’s why we’re proud to be the world’s leading festival city. Relative to our medium size as a city, the intensity and global renown of what goes on here across the year keeps us in that premier position.”

Edinburgh’s geographical location has played a significant role to this end. When founder and impresario, Rudolph Bing, arrived in the city surrounded by the remains of its ancient volcanic landscape he saw the potential in what Julia refers to as its very own natural drama. “It’s also a very compact and walkable city,” she says. “It is transformed by festivals in a way that bigger cities can’t be. I think it is quite magical how our city can be transformed by a truly great festival to the extent that people who come to experience it feel the everyday being interrupted by something extraordinary.”

And extraordinary lies at the heart of the 2017 anniversary celebrations. This year’s festivals are focused on the past, present and future of Edinburgh’s extraordinary festival heritage, with scores of events celebrating the founding of the festivals, their growth over the years and the direction in which they’re going.

Edinburgh’s Hogmanay opened in style with an iconic 70th anniversary midnight display, welcoming in the New Year as only Edinburgh can. The Children’s Festival also marked the 70th anniversary by empowering the next generation of festival-goers, organisers and performers. The Edinburgh International Book Festival’s ‘Outriders’ project has seen five Scottish authors sent out to various parts of North and South America to explore how writers can contribute to our understanding of the world. The Edinburgh International Festival, meanwhile, features ‘Bloom’, an immersive spectacular set in the world heritage New Town. It celebrates the ‘flowering of the human spirit’ and harks back to the ethos of the festival of 1947.

Returning to the spirit of 1947

The year 2017 is more than just an anniversary, though, for the values of internationalism and enlightenment that informed the very first Festivals have never been more relevant.

“Given our divided planet our focus will be to dream, reflect, invent and imagine the world we want to live in,” says Julia. “That means putting artists, thinkers and audiences centre stage in creating shared human futures. Together we can explore, experiment and think about what today and tomorrow could be, not just what is.”

Some 25,000 artists, writers and thinkers will be coming from more than 70 different countries to share in this spirit. Collectively they will transform Edinburgh into a crucible for debate around the issues the world faces now and that will affect it in the future. Edinburgh’s population will swell to double its normal size during the main festival period.

The EICC itself will be showcasing this very spirit on 16 August with the arrival of ‘Requiem for Aleppo’, which sold out at its world premiere earlier this year. A profound and haunting performance in aid of Syria Relief, it combines music, dance and real-life stories to create a non-political expression of solidarity for the people of Syria.

Julia believes that for many people Edinburgh’s festivals really can become spiritual experiences. “Edinburgh has become very conscious of the power of festivals,” says Julia. “They are both a mirror to the world and a force that helps shape the world for the better.” And seven decades after the premiere one took place, Edinburgh continues to welcome that world.

The Timeline of Festivals 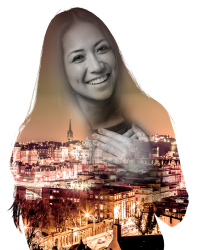 Edinburgh’s Hogmanay becomes a fully organised event, and one renowned the world over.

Upcoming events at the EICC

The Story of China

In a Faraway Place

Nina Conti: In Your Face